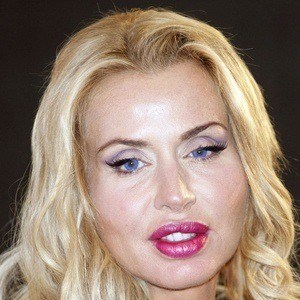 Italian model turned fashion designer behind the collections Seduzioni Jeans and Seduzioni Diamonds, which strive to enhance the femininity of a women. She also created a line called Love Toys. She has been featured on the cover of magazines such as Play Men, Maxim, Fox, Panorama, Diva, Vip Party, and Amori, among others.

She previously worked as a showgirl and actress and made her debut appearance in the movie Cronaca Nera in 1987.

She became a member of Milan's Chamber of Fashion.

She was born in Rome, Italy, and grew up in Cagliari. She married Italian businessman Giovanni Cottone in 2013.

She was nominated to present the Festival di Sanremo with actors Mike Bongiorno and Piero Chiambretti.

Valeria Marini Is A Member Of