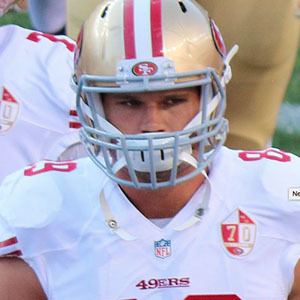 Tight end who was drafted by the San Francisco 49ers in 2013 and played with the team until 2017, when he was traded to the Pittsburgh Steelers. He was previously a first-team All-C-USA selection at Rice University.

He attended East Chambers High School in Winnie, Texas, where he was a three-year letterman.

He is a former long jump and triple jump athlete.

He married a woman named Kendi. They have two children together.

He has caught passes from Ben Roethlisberger in Pittsburgh.

Vance McDonald Is A Member Of