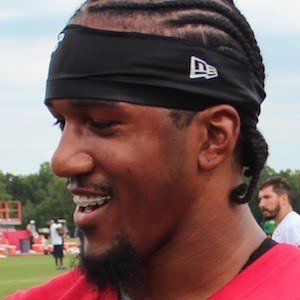 Highly-touted defensive end who became a First-Team All-ACC selection with the Clemson Tigers. He was selected eighth overall in the 2015 NFL Draft by the Atlanta Falcons. In 2016-17, he led the NFL in sacks with 15.5 and helped the Falcons reach Super Bowl LI.

He attended Adairsville High School and went on to play for Clemson University from 2011-2014.

He led the country in sacks through the first six games of his junior season at Clemson. He made an Orange Bowl appearance with the team in 2014

He and Gaines Adams are two of the best defensive ends in Clemson Tigers history.

Vic Beasley Is A Member Of