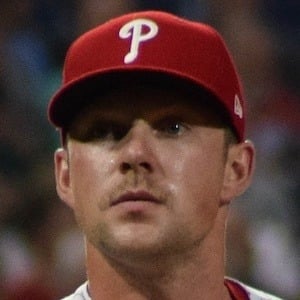 First baseman and left fielder who made his MLB debut with the Philadelphia Phillies in 2017.

He attended Jesuit High School in Carmichael, California, then enrolled at California State University, Sacramento, where he played college baseball for the Sacramento State Hornets. He was then drafted to the Philadelphia Phillies in the fifth round of the 2014 Major League Baseball draft. He made his MLB debut in 2017.

He was born and raised in Sacramento, California. He got engaged to Jayme Bermudez in 2018.

He became teammates with catcher Cameron Rupp on the Phillies.

Rhys Hoskins Is A Member Of