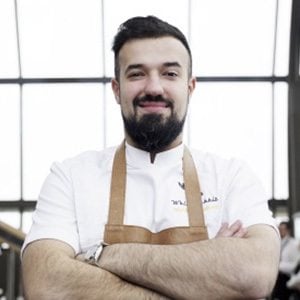 Professional chef who is known for his work with the critically acclaimed restaurant White Rabbit in Moscow. He is also known for owning and operating the Chefs Table restaurant as well as several other restaurants throughout the Moscow area.

He first opened the restaurant White Rabbit in 2011. He noticed success in 2014 when heavy sanctions were placed upon Russia. Now forced to grow their own food, cheese, and other ingredients, his farm to table style was a hit among the Moscow crowd.

His restaurant White Rabbit was listed as one of The World's 50 Best Restaurants for his local ingredients, traditional style of Russian cooking, and innovative dishes.

He is known for being a fifth generation chef who was inspired by his grandmothers cooking.

Other professional chefs who have also been featured on the Netflix series Chef's Table include Francis Mallmann and Massimo Bottura.

Vladimir Mukhin Is A Member Of