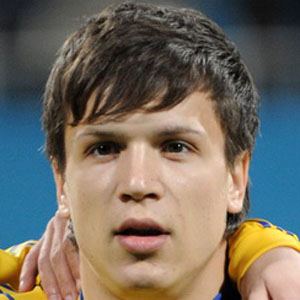 Midfielder who joined Dnipro Dnipropetrovsk in 2007 and became part of the Ukrainian national team in 2010.

He started out in the youth system of FC Olimpik Kirivohrad, and joined Dnipropetrovsk at age 16.

He started in all of Ukraine's Euro 2012 matches, and for his contribution to his home side Dnipro Dnipropetrovsk, he was named Ukrainian player of the year.

He was born in Kirovohrad, Ukraine.

He played alongside Andriy Shevchenko on the Ukrainian national team, assisting on Shevchenko's decisive goal in a match against Sweden in the 2012 Euros.

Yevhen Konoplyanka Is A Member Of