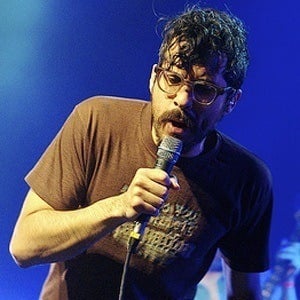 American underground hip-hop artist and indie rock musician who is best known for his work with the band Why? As a solo artist he is recognized for the 2003 studio album Oaklandazulasylum which received generally favorable reviews from critics.

As a teenager he discovered an old 4 track recorder in his father's synagogue which ultimately led him to begin creating music.

In 1997 he co-founded a live improvisational group known as Apogee.

Both he and his younger brother Josiah Wolf performed with the band Why?

He collaborated with rapper Doseone on the side project known as Clouddead.

Yoni Wolf Is A Member Of