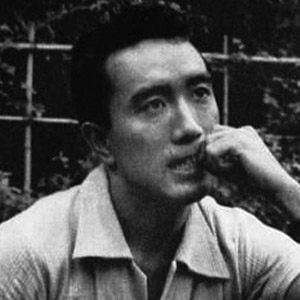 Remembered for such avant-garde literary works as The Sound of Waves, The Temple of the Golden Pavilion, and Silk and Insight, this Nobel Prize-nominated Japanese novelist also wrote poems and Kabuki plays and had a second career as an actor, bodybuilder, and model.

Although his father forbade him from writing, viewing the practice as "effeminate," Mishima secretly wrote numerous stories during his childhood and teenage years. After attending the University of Tokyo, he briefly worked for the Japanese government's Finance Ministry before becoming a full-time writer.

As an actor, he starred in director Yasuzo Masumura's 1960 Japanese Mafia movie, Afraid to Die.

His marriage to Yoko Sugiyama resulted in a son and a daughter. Throughout his marriage, however, he had romantic liaisons with men.

Yukio Mishima Is A Member Of