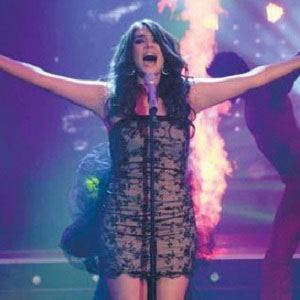 Famous for her numerous Platinum and Gold-designated recordings, this Mexican vocalist is particularly known for her albums La Voz de un Angel (2005), Habla El Corazon (2006), and Nada es Color de Rosa (2009). Her most popular singles include "No Me Preguntes Mas" and "Yo Por El."

She rose to fame while competing in Season 4 of the Mexican reality talent competition La Academia. After finishing the contest as runner-up, she released her debut album, which quickly sold more than 1.5 million copies.

She won a 2007 Latin Billboard Award and was nominated for numerous other honors, including a 2014 World Music Award and 2006 and 2007 Premios Juventuds.

In 2011, she rekindled a romantic relationship with fellow Mexican-born pop singer Mario Domm.

Yuridia Is A Member Of