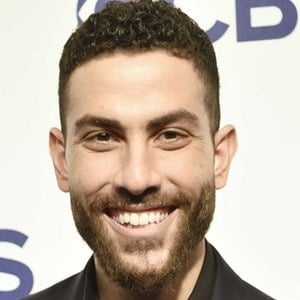 Model and actor who landed his first series regular role as Omar Adom "O. A." Zidan in FBI. He had previously landed recurring roles in Six and 24: Legacy, and booked feature film roles in Max (2015), Alvin and the Chipmunks: The Road Chip (2015) and Allegiant (2016).

He developed his passion for acting at Unionville High School where he performed in a production of Seussical. He briefly attended Temple University.

He played a military man in an episode each of Homeland and Revolution in 2012.

He was just one month of age when he immigrated to the United States. He grew up in West Chester, Pennsylvania. His mom managed a salon and his father worked as a stylist. He has a younger brother and younger sister.

He starred alongside Jeremy Sisto in the series FBI.

Zeeko Zaki Is A Member Of

Alvin and the Chipmunks: The Road Chip
FBI
Allegiant
24: Legacy