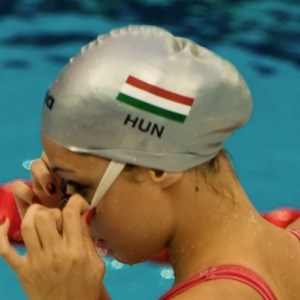 Professional Hungarian swimmer who specializes in sprinting freestyle events. She is known for competing with the club Jovo SC but is also known for her work with Hungary's national team.

She first began swimming for the Tiszaujvaros Water Sports Club. At the age of twelve she showed great promise and her and her family moved to Budapest where she could train full time. Her first major tournament was in 2006 when she competed in the Hungarian Long Range Championships.

She was known for competing as Hungary's youngest swimmer in the Women's 50m Freestyle at the 2008 Summer Olympic Games in Beijing.

She was born and raised in Miskolc, Hungary. She married Daniel Varga in September of 2012 and their first son was born in April of 2014.

Katinka Hosszu and Krisztina Egerszegi are fellow swimmers from Hungary who also competed for the national team.

Éva Dobár Is A Member Of