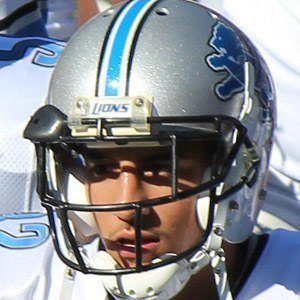 Cornerback who signed with the Detroit Lions as an undrafted free agent in 2010; joined the New York Jets in 2012.

He played college football at the University of Pittsburgh, where he was a contributor on special teams.

After the Lions were blown out in the first round of the 2011-12 NFC playoffs, Berry released a frustrated tweet criticizing Detroit fans as well as the city of Detroit. He would never play another game for the Lions.

He was raised in Harrisburg, Pennsylvania.

He played alongside defensive tackle Ndamukong Suh on the Lions from 2010 to 2011.

Aaron Berry Is A Member Of