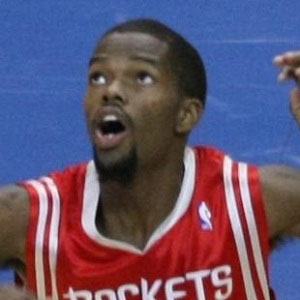 Journeyman NBA point guard who excelled as a starter for the Houston Rockets in 2009-10, earning the NBA's Most Improved Player Award while averaging 19.6 points and 5.3 assists per game. After four years in Houston, he went on to play for such teams as the Phoenix Suns, Sacramento Kings, Denver Nuggets and Chicago Bulls.

He was a McDonald's All-American in 2003, his senior year at Franklin High School in Seattle, Washington. He then became a four-year starter at the University of Oregon and earned First Team All-Pac-10 honors his senior year.

During the 2011 NBA lockout, he starred for the Guangdong Southern Tigers in the Chinese Basketball Association. He was selected as the starter for the 2012 CBA All-Star game and he led the Tigers to the CBA Finals where they were defeated by the Beijing Ducks.

After a late season injury to Derrick Rose in 2014-15, he became the starting point guard for the Chicago Bulls.

Aaron Brooks Is A Member Of