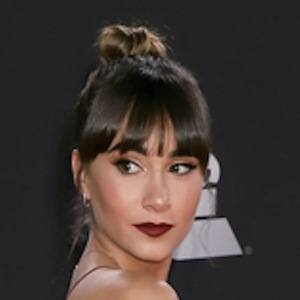 Pop singer and composer who took part in the 9th series of the talent competition show Operación Triunfo and finished in second place. In 2018, she signed with Universal Music Spain and the following year, she released her first studio album, Spoiler. She's known for hit songs such as "Teléfono," "Presiento" and "Vas a Quedarte."

She intended to study design before she began a singing career. She started sharing cover versions of songs to YouTube in 2014.

She competed to represent Spain in the Eurovision Song Contest 2018 with the song "Arde" as a solo artist and finished second. She also sang "Lo malo" as part of a deut with Ana Guerra and finished third. She appeared in a first season episode of the series Skam España.

She was born Aitana Ocaña Morales to parents Cosme Ocaña and Belén Morales. She is an only child. In 2019, she began dating actor Miguel Bernardeau.

She and Ana Guerra did a remix of their hit "Lo Malo" featuring TINI and Greeicy in 2018.

Aitana Is A Member Of