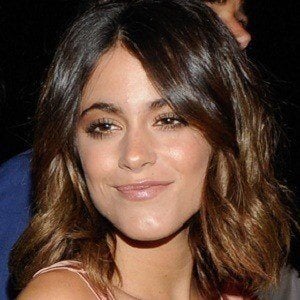 Argentinian singer and actress also known as Martina Stoessel who rose to fame playing the title role in the Disney Latino series Violetta. As a recording artist, she released her debut self-titled album in 2016 and in 2018 she followed it up with Quiero Volver which included the hit songs "Princesa" featuring Karol G and "Consejo de Amor" featuring Morat.

She studied piano, singing, and dance at an early age. She made her TV debut in the kids telenovela Patito Feo at the age of 10.

She voiced the character Carrie Williams for the Italian release of the 2013 film Monsters University. She was featured in the Latin version of the movie Frozen's soundtrack, in which she performed the massive hit song "Let It Go" in Spanish, titled "Libre Soy."

Her father is producer Alejandro Stoessel and her mother is Mariana Muzlera. She has an older brother named Francisco. She dated model Pepe Barroso Silva from 2017 until late 2018. She dated singer Sebastián Yatra from June 2019 to May 2020.

In 2020, she starred alongside Noah Centineo in the movie The Dairy, written and directed by Jackie Chan.

TINI Is A Member Of