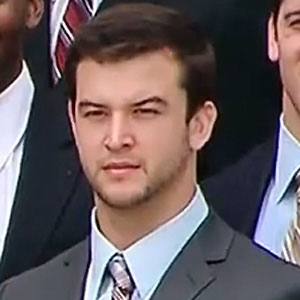 Quarterback who helped lead the University of Alabama to back to back National Championships in 2011 and 2012. He was selected 164th overall in the 2014 NFL Draft by the Cincinnati Bengals.

He was the only quarterback recruited by Alabama in 2009.

He received the Maxwell Award and the Johnny Unitas Golden Arm Award in 2013 and he was named the BCS Offensive MVP in 2012.

While at Alabama, he began a much-publicized relationship with Katherine Webb, winner of the 2012 Miss Alabama pageant. The couple got married in 2014. They have three sons named Tripp, Cash and Gunnar.

Under head coach Nick Saban, McCarron helped lead one of the most dominant periods in Alabama football history.

AJ McCarron Is A Member Of