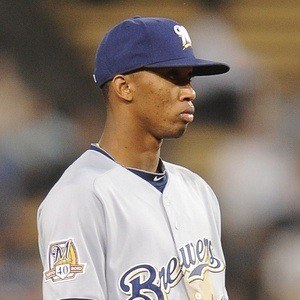 Shortstop who began his career in 2008 with the Milwaukee Brewers. In 2014, he helped lead the Kansas City Royals on a miraculous run to the World Series where they were defeated by the San Francisco Giants in 7 games. The following year, he and the Royals captured the World Series title with a 5-game victory over the New York Mets.

He was initially signed as an international free agent by the Milwaukee Brewers in 2003, but spent five years in the Brewers minor league systems.

He was traded to the Kansas City Royals in December 2010 as part of a package in exchange for pitcher Zack Greinke.

His cousin Kelvim Escobar was a Major League pitcher. He has two children, Gabriela and Massimiliano, with his wife Francys.

He played alongside Billy Butler on the Kansas City Royals.

Alcides Escobar Is A Member Of