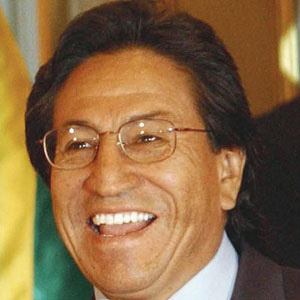 Peruvian politician who served as President of that nation from 2001 to 2006. Decentralization was a major initiative of his presidency and he sought to give indigenous groups greater influence upon policy-making on a regional level.

He was born into poverty but was able to receive a BA degree in economics and business administration from the University of San Francisco by obtaining a partial soccer scholarship and working part-time pumping gas.

He built and developed a strong relationship with US President George W. Bush and, in 2002 he received a $300 million commitment from Bush to fund alternative-crop development in coca-producing areas.

He married Elian Karp and he has indigenous bloodlines.

He was replaced in office by Alan Garcia.

Alejandro Toledo Is A Member Of