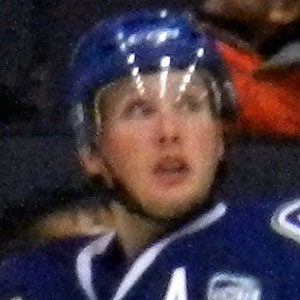 Canadian defenceman who spent four years at Harvard University, where he made the ECAC Hockey All-Academic Team and won the John Tudor Memorial Cup as the Crimson's MVP. He later spent time in the AHL with the Portland Pirates and Rochester Americans before making his NHL debut with the Vancouver Canucks in 2015.

He was born in Montreal and was drafted by Rimouski Oceanic in the first round of the 2004 QMJHL Entry Draft.

His first NHL goal was a game-winner over the Minnesota Wild in February 2015.

His younger brother Danny Biega is also an NHL player.

He became teammates with goaltender Eddie Lack in Vancouver in 2015.

Alex Biega Is A Member Of