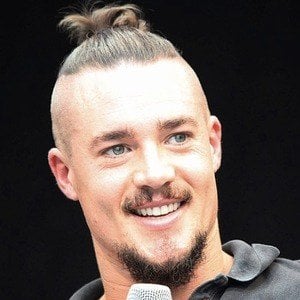 German-born actor most well known for bringing to life Uhtred of Bebbanburg in the BBC Two's The Last Kingdom. He played the character from 2015 until 2022. He also portrayed Luke Ramsey in American Horror Story: Coven.

After completing studies in Paris, he then spent three years at Drama Centre London. He then began his acting career on stage in London and Paris.

In 2011, he starred opposite Doctor Who's Matt Smith in the made-for-TV movie Christopher and His Kind. He reprised his role as Uhtred in the TV follow-up movie The Last Kingdom: Seven Kings Must Die.

He was born Alexander Doetsch in Germany, he grew up around the world, living in France, Switzerland, Germany, and the United States.

Alexander Dreymon Is A Member Of