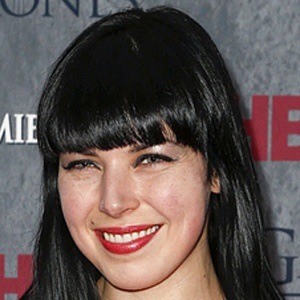 Noise pop singer and songwriter who fronts the band Sleigh Bells, a group that has released albums titled Treats, Reign of Terror, Bitter Rivals and Jessica Rabbit. She and a friend founded a beauty blog called Beauty Lies Truth in August of 2014.

She was involved in musical theater from the age of nine until she was sixteen. She was involved with a teen group called RubyBlue around that time. She then majored in international studies at Marymount Manhattan College.

She previously worked as an elementary school teacher for two years. She had received New York State certificates from Pace University for elementary and bilingual education.

She is the daughter of professional musician Joel Krauss of Holme and Cats on a Smooth Surface.

The Sleigh Bells song "Crown on the Ground" was used in the trailer to Sofia Coppola's The Bling Ring.

Alexis Krauss Is A Member Of