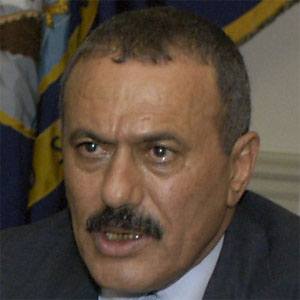 After holding office as President of North Yemen during the 1980s and late 1970s, this Middle Eastern General People's Congress Party politician served from 1990 until 2012 as President of the Yemen Arab Republic. Several months after surviving a 2011 assassination attempt, he ended his political career.

He received only a partial elementary education and began serving in the North Yemeni Army in his teens. In 1977, he became the military leader of Yemen's Ta'izz Governorate.

He grew up in Bait el-Ahmar, Yemen, in a family of the Zaydi Shia Islamic faith. His oldest son, Ahmed Saleh, became a commander in Yemen's army.

He was born in the same year and month as Iranian Prime Minister Mir-hossein Mousavi.

Ali Abdullah Saleh Is A Member Of