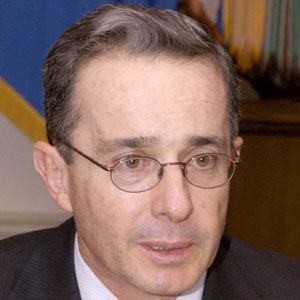 Colombian president from 2002 to 2010 who dedicated his time in office to ridding the country of the armed groups that killed his father. He had an unparalleled amount of popularity amongst his citizens while he was in office.

He began his political career as a Senator, supporting pension and social security reform, and then took over as Governor of Antioquia, putting some of his advocated policies into action.

During his time in office, he forced Colombian guerillas out of the country's major cities, and into the countryside, earning much praise from ordinary citizens.

His father, Alberto Uribe Sierra, a wealthy landowner, was killed by Colombia FARC armed group in 1983.

Juan Manuel Santos succeeded him as Colombia's president in 2010, continuing many of his policies.

Alvaro Uribe Is A Member Of