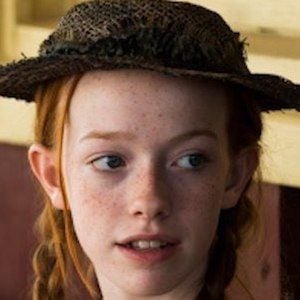 Irish-Canadian actress who reached a new level of fame when she was cast as the titular character on Anne with an E, Netflix's revival of Anne of Green Gables. She previously appeared on series like Agatha Raisin and Clean Break.

She read the Anne of Green Gables books when she was nine years old.

She beat out more than 1,800 young actresses for the lead role on Anne. She also starred as Vicky in Netflix's Stranger Things.

Her mother Siobhan is Canadian and her father is Irish. She dated Louis Hynes.

She appears with Christian Martyn on Anne with an E.