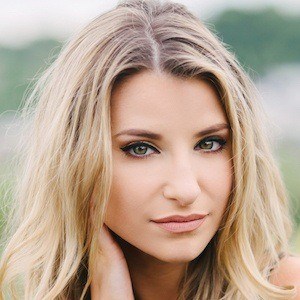 Country singer and songwriter who is best known for her single "Fireflies," which debuted on Radio Disney and became available on iTunes in September 2015.

She began singing at the age of five as part of church services her father led. She has performed at the Apollo Theater's Amateur Night, on Regis & Kelly as a backup vocalist for Enya, and at various other events.

She has worked with nationally famous singers, such as American Idol contestant Charity Vance and The Voice winner Javier Colon.

She moved to Nashville, Tennessee, to pursue her music career. She has a cat named Colbie and a dog named Pepper. She has a younger sister named Kaydence. She and Jeremy Galtieri wed on September 22, 2018.

She knew she wanted to be a singer when she performed at a gala event in front of Jermaine Jackson at the age of 13.

April Kry Is A Member Of