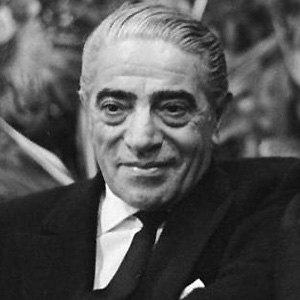 Greek-Argentine shipping tycoon who married Jacqueline Kennedy on October 20, 1968, after a financial marital contract was brokered.

He worked for a telephone company after serving for Greece in World War I. He made his early fortune by smuggling tobacco.

He was one of the men responsible for the Omega Project, along with Greek Prime Minister Col. George Papadopoulos, whom he allegedly bribed.

His first wife was Athina Livanos, the daughter of shipping magnate Stavros G. Livanos. He had a son, Alexander, and a daughter, Christina, with her. His torrid affair with opera diva Maria Callas ended this union.

His death in 1975 led to much haggling over his estate. Ted Kennedy negotiated Jackie Kennedy's share, which equaled, depending on the source, either $10 million or $26 million.

Aristotle Onassis Is A Member Of