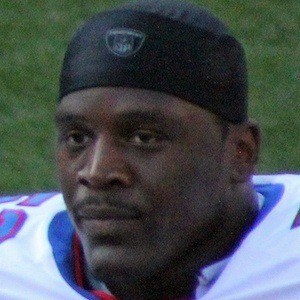 NFL linebacker who is largely known for ending Brett Favre's consecutive games started streak at 297 as a member of the Buffalo Bills. He delivered a hit on the quarterback in week 13 of the 2010 NFL season that aggravated his shoulder injury.

He graduated from James Madison University with a degree in political science. He also served as the school's football team captain.

He was drafted 178th overall in the 6th round by the Buffalo Bills. He later signed with the Pittsburgh Steelers following the 2013-2014 season, and signed a 3 year extension with the team in March 2015.

He was born in Norfolk, Virginia. His father, a high school math teacher, was also a former Marine.

He played for coach Mike Tomlin as a member of the Pittsburgh Steelers.

Arthur Moats Is A Member Of