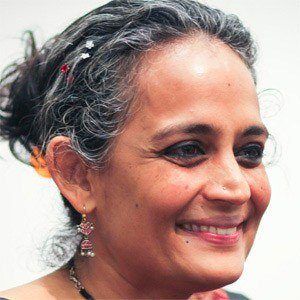 Best known for her 1998 Man Booker Prize-winning novel The God of Small Things, this Indian writer and environmental and human rights activist also won an Indian National Film Award for penning the screenplay of a popular television movie. In 2004, she received the Sydney Peace Prize for her non-violent social activism work.

After studying at the School of Planning and Architecture in Delhi, India, she secured employment at the National Institute of Urban Affairs.

Her politically-themed nonfiction works include The Algebra of Infinite Justice and Capitalism: A Ghost Story.

She married Indian director Pradip Krishen, with whom she collaborated on several film and television projects.

In 2011, she publicly criticized the actions and anti-corruption movement of fellow Indian activist Anna Hazare.

Arundhati Roy Is A Member Of