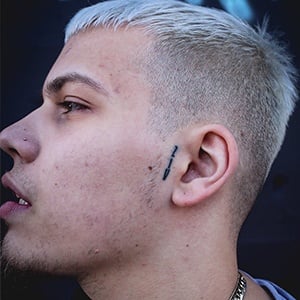 Christian rapper and hip hop artist who rose to fame in 2013 following the release of his debut album Murder My Flesh. He followed with his debut EP Hipsavvy: The Introduction in 2014. He's also the creator behind the brand known as HIPSAVVY.

His father played a lot of Latin and soul music around the house. At the age of six, he was DJing at local events, by ten he was writing his own songs, and by twelve was composing music using computer software.

His debut album Murder My Flesh peaked at #14 on the US Gospel charts after it was released in 2013.

He was born Aaron Michael Rivera to a Puerto Rican father and a Hungarian mother. He has an older brother named Chris.

His EP Hipsavvy: The Introduction features numerous tracks with John Givez such as "Versace Dreams" and "Hipsavvy Cypher."

Asaiah Ziv Is A Member Of