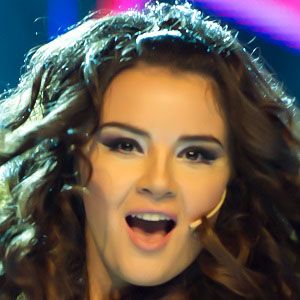 Azerbaijani pop singer who shot to stardom after performing the song "Always" at the 2009 Eurovision Song Contest alongside Iranian-Swedish singer Arash. After Eurovision, she and Arash toured Europe, and in 2012 she was selected to be part of the jury at Eurovision.

She began attending Texas High School in Texarkana, Texas in 2005. She won singing contests held at Southern Arkansas University and the University of Texas at Austin and appeared on the fourth season of the show Yeni Ulduz.

She was the first female contestant ever to represent Azerbaijan at the Eurovision Song Contest.

She married and had children with Murad Adigozalov, director of the Azerbaijan State Philharmonic Society.

She and Farid Mammadov have both represented Azerbaijan at the Eurovision.

Aysel Teymurzadeh Is A Member Of