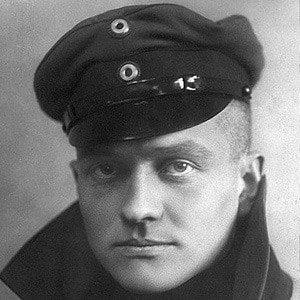 World War I German fighter pilot who was nicknamed and feared as "The Red Baron." He was victorious in over eighty World War I air battles and remains one of the world's most famous fighter pilots.

He competed in gymnastics, hunting and horse riding in his youth.

He piloted a Fokker Dr. I triplane, which he painted red in January 1917.

He was born into the Prussian aristocracy.

He inspired a generation of pioneering aviators, including Charles Lindbergh.

Manfred Von Richthofen Is A Member Of