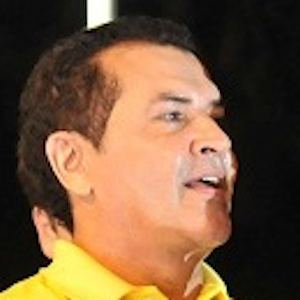 Brazilian singer and composer who is known for being the King of Lambada. He is also known for being the composer of Adocica which sold over three million copies. He shares videos of his live performances along with other lifestyle content through his Instagram for his over 170,000 followers.

He released his first album in 1985 entitled Acts and Facts. He then went on to release his first hit single in 1992 entitled Gypsy of Love.

He is known for being the first artist from the North of Brazil to win the Trofeu Imprensa award in 1991.

He was born and raised in Belem, Para, Brazil and shared a photo of his mother to Instagram in May of 2018.

He shared a photo of him performing alongside fellow singer Gustavo Mioto to his Instagram in May of 2018.

Beto Barbosa Is A Member Of