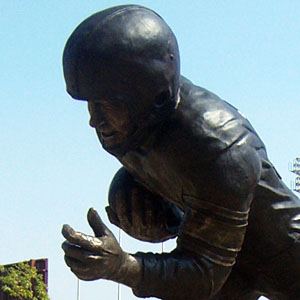 Legendary University of Oklahoma halfback who won the 1952 Heisman Trophy. He was selected second overall in the 1953 NFL Draft by the Baltimore Colts but only briefly saw the field in the NFL.

His family moved from Cleveland, OK, to Oklahoma City when he was 14, but he stayed behind with relatives, getting by with odd jobs and support from the townspeople.

He was the first player from the state of Oklahoma to win the Heisman Trophy.

He fathered three children with his wife Suzanne.

He and Johnny Unitas were both drafted by the Baltimore Colts.

Billy Vessels Is A Member Of