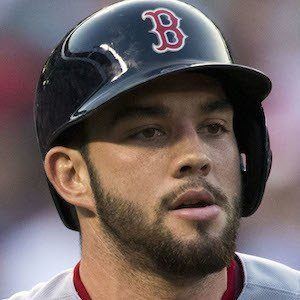 MLB catcher who was drafted 26th overall by the Boston Red Sox in the 2011 draft. He made his major league debut in 2015 after Ryan Hanigan was injured. He won the 2018 World Series with the Red Sox.

He had committed to play baseball at the University of Texas before he was drafted, but was offered $2.5 million to forego the scholarship and sign with Boston instead.

He was both a talented pitcher and shortstop in high school, but started playing catcher when he joined the Red Sox organization.

He was born to Carla and Arlan Swihart in Bedford, Texas, but went to high school in New Mexico.

He recorded his first major league hit in 2015 against Nathan Eovaldi.

Blake Swihart Is A Member Of