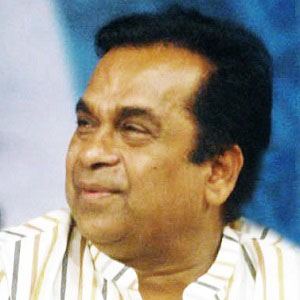 Notable for his work in India's Telugu film industry, he appeared in over 1,000 movies between the late 1980s and the early 2000s and earned a Guinness World Record for his prolific body of work. He received several Nandi Awards, as well as a Filmfare Best Comedian Award for his role in Manmadhudu.

Early in his career, he portrayed Ara Gundu in the film Aha Naa Pellanta.

He hosted a game show called the Brahmi 1 Million Show.

Born Brahmanandam Kanneganti, he spent his youth in Sattenapalli, Andhra State, India. He has two children.

He appeared with Mahesh Babu in the 2011 Telugu action movie Dookudu.

Brahmanandam Is A Member Of