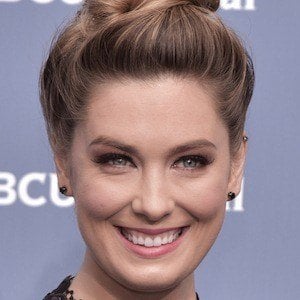 Perhaps most well known for her recurring role as Holly on TBS's Cougar Town and for her series regular role as Jennifer on the same network's comedy series Ground Floor, she is also recognized for her portrayal of Nicki on NBC's Undateable, as well as for her role as Amanda Clark on ABC Family's Jane by Design.

Before beginning her screen acting career, she studied at Massachusetts' Walnut Hill School for the Arts; the Cincinnati Conservatory of Music; and the University of Southern California.

The daughter of teacher and actress Kimball Heelan and playwright and teacher Kevin Heelan, she spent her youth in Andover, Massachusetts, and grew up with a brother named Conor. In late 2014, she announced her engagement to her Ground Floor castmate Rene Gube.

She appeared with Eliza Coupe in a 2013 episode of Happy Endings.

Briga Heelan Is A Member Of