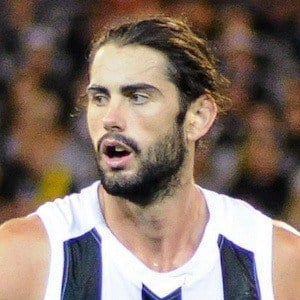 Ruckman who joined Collingwood in 2013. He was the Round 22 nominee for the 2013 AFL Rising Star award. He is also an AFLPA ambassador for La Trobe University.

He attended the Cabra Dominican College for high school until he graduated in 2011.

He signed on to play with Collingwood through the 2017 AFL season in March 2014. He has 90,000 followers on his brodiegrundy Instagram account.

He has a Border Collie named Ava.

He and Jake Stringer are both Australian rules footballers born in 1994.

Brodie Grundy Is A Member Of