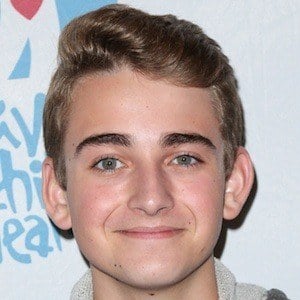 Actor who took on his first starring role as Wendell on Wendell & Vinnie in 2013. He appeared on Nickelodeon's Ho Ho Holiday Special in 2015.

He made his acting debut at age 10 on a 2009 episode of the television series Hannah Montana.

He had his first recurring television role as Henry Dillon on Disney's Shake It Up.

His acting career was supported by his parents growing up in Danville, California.

He guest-starred with Tyler Labine on two episodes of the series Sons of Tucson in 2010.

Buddy Handleson Is A Member Of