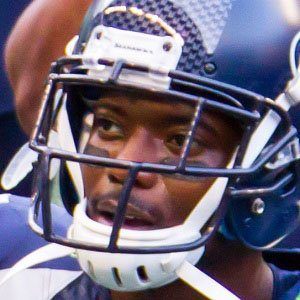 NFL cornerback who was a sixth round pick of the Seattle Seahawks in 2011. He became an unlikely starter in Seattle's secondary in 2013 and helped lead the team to victory in Super Bowl XLVIII. In 2015, he signed a six-year deal with the Philadelphia Eagles.

He was a standout cornerback at Fort Dorchester High School in North Charleston, South Carolina; his junior year, he recorded 60 tackles while leading the team with 5 interceptions.

He played college football at Clemson, forcing 6 fumbles and compiling 45 special teams tackles during his career, while developing a reputation as one of the ACC's hardest hitting defensive backs.

He was born and raised in North Charleston, South Carolina.

In 2013, he became Seattle's number 2 corner beside one of the NFL's top defensive players, Richard Sherman.

Byron Maxwell Is A Member Of