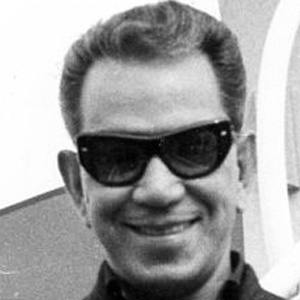 Mexican comic performer, producer, and screenwriter who gained fame as Mario Moreno and was commonly called the Charlie Chaplin of Mexico. He won the 1962 El Analfabeto Menorah Award for Best Comic Actor. Oscar Jaenada was cast to play him in a 2014 biopic about his life entitled Cantinflas.

He grew up on the streets, and worked as a prizefighter and circus performer later in life.

He had a profound impact on Mexican cinema, being a pioneer of its golden age and also becoming known for his aggressive fight against government control of labor unions.

He was married to Valentina Ivanova Zubareff from 1936 until her death in 1966. They were parents to eight children.

He became known to U.S. audiences for co-starring with David Niven in 1956's Around the World in 80 Days, a role for which he won a Golden Globe Award for Best Motion Actor in a Comedy or Musical Film.

Cantinflas Is A Member Of