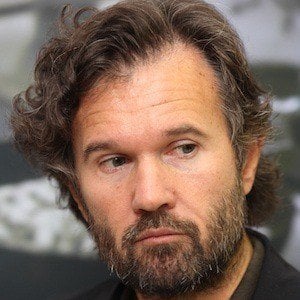 Italian chef who began hosting MasterChef Italia in 2011 after previously hosting the first and second seasons of Hell's Kitchen Italia. He has earned acclaim from food reviewers and publications for his cooking at the restaurants Cracco Peck, Enoteca Pinchiorri, L'Albereta and Le Clivie.

He graduated from the Pellegrino Artusi Institute of Hospitality Management. He started getting more opportunities in kitchens after he began collaborating with Gualtiero Marchesi.

He became president of the non-profit Maestro Martino in 2012.

He has two sons with his wife Rosa Fanti, and two daughters from his first marriage.

Carlo Cracco Is A Member Of