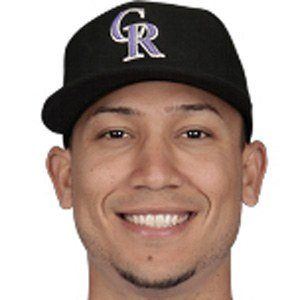 MLB outfielder who began his career with the Oakland Athletics in 2008, then was traded to the Colorado Rockies in 2009. He became the starting right fielder for the Rockies in 2015.

He was signed by the Diamondbacks at the age of 17, but did not make his MLB debut until 2008 with the Oakland Athletics.

He had his breakout season in 2010, when he was the NL batting Champion and a Silver Slugger Award winner.

He married Indonesia Riera on October 20, 2012. They welcomed twins in 2014. Riera has a son from from a prior relationship, whom Gonzalez adopted.

He was involved in the 2008 trade that sent Matt Holliday to the Oakland Athletics.

Carlos Gonzalez Is A Member Of