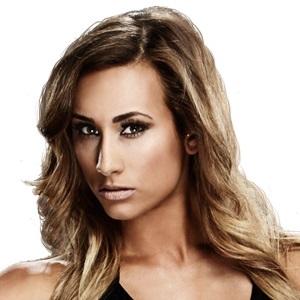 Born Leah Van Damme Dale and better known by her ring name of "Carmella," this female wrestler was signed to World Wrestling Entertainment's development program in 2013 and became a full-fledged professional wrestler later that year.

After graduating from the University of Massachusetts at Dartmouth with a degree in marketing, she was a cheerleader for both the New England Patriots and the Los Angeles Lakers.

She was featured in Maxim, Esquire, and Muscle and Fitness magazines and also appeared in a national commercial for Visa.

She grew up in Worcester, Massachusetts, as the child of professional wrestler Paul Van Dale. She dated fellow WWE wrestler Colin Cassady. She is dating former wrestler Corey Graves.

In Fall 2013, she defeated the seasoned wrestler Emma in a WWE match.

Carmella Is A Member Of