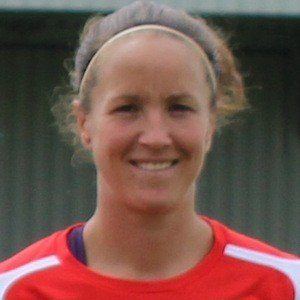 Defender for the Arsenal Ladies who was with the organization from 1999 to 2002, returning to the team in 2014. In between her Arsenal tenures, she played for the Charlton Athletic Ladies, Chelsea Ladies and Lincoln Ladies while also serving as a member of the England women's national football team.

The Independent newspaper ranked her 50th on their Pink List of influential lesbian and gay people in the UK.

She began a relationship with former teammate Megan Harris with whom she has twins named Teddy and Tilly.

In 2012, she succeeded Faye White as the captain of the England women's national football team.

Casey Stoney Is A Member Of