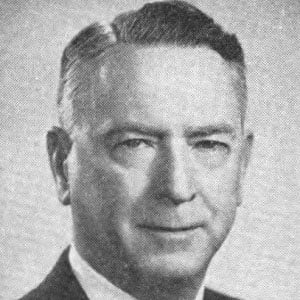 From 1953 until 1973, this Republican Party politician served as a United States Representative from North Carolina. For an eighteen-year period during his ten consecutive congressional terms, he was a member of the House Appropriations Committee.

After earning his bachelor's and law degrees from the University of North Carolina at Chapel Hill, he served in World War II, eventually achieving the rank of Lieutenant Colonel in the United States Army.

Nicknamed "Mr. Republican," he was one of his home state's first federally-elected Republican politicians.

His father, Charles A. Jonas, was also a lawyer, politician, and U.S. Representative from North Carolina.

Jonas and West Virginia Democrat Robert Byrd were both elected to the United States House of Representatives in 1953. (Byrd remained in the House until 1959 and subsequently became a multi-term United States Senator).

Charles R Jonas Is A Member Of