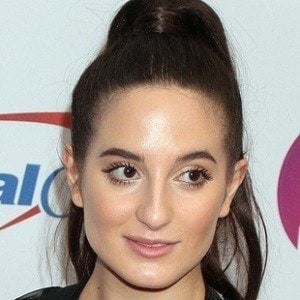 Singer-songwriter based in Los Angeles, she made the leap from successful songwriter to singer. She wrote "Zipper" for Jason Derulo, "Burnin' Up" for Jessie J, and "Get On You Knees" by Nicki Minaj. She has been featured on a variety of songs including "Sexy Beaches" by Pitbull, which she also wrote.

She began having success in the music scene in 2013 when she was featured in the self-released Stephen Swartz track "Survivor." She then followed up with selling six of her written songs in 2014, and nice in 2015.

She is also active in the EDM arena, collaborating with various musicians as a singer.

While attending Flint Hill High School in Virginia she joined the Majors & Minors, a high school a cappella group that consistently wins international recognition for its talents.

In August 2015 she performed on the Today Show in New York City with rapper LunchMoney Lewis for their 2015 single "Whip It!".

Chloe Angelides Is A Member Of