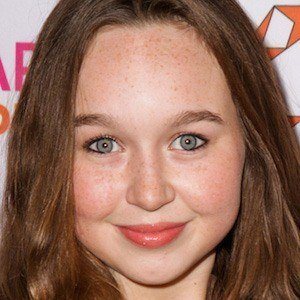 Young Artist Award nominee in the category of Best Performance in a TV Movie, Miniseries or Special for her performance as Sarah Knepp in the Lifetime original movie Amish Grace. She played Jane in a web production of Disney's Descendants called "School of Secrets."

She developed an interest in acting when she was just three years old, attending the acting program at John Hopkins Middle School as part of their fine arts program.

She booked a voice over role for Disney's Airbud. She has done commercials for HH Gregg, Apple, AT&T, Gap and Hallmark.

She is an only child. She moved with her parents from Tennessee to St. Petersburg, FL when she was six years old. She and her family won $1,000 in a radio contest, and she used the money to fly to Los Angeles to stay with her aunt and uncle, as well as try out acting.

She was featured in Amish Grace alongside star Kimberly Williams-Paisley.

Chloe Madison Is A Member Of