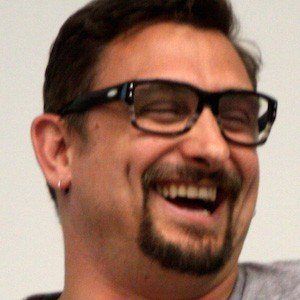 Celebrity chef first known for his appearances as a competitor on Iron Chef American and The Next Iron Chef. He later went on to co-host Chefs vs. City and then, in 2012, to win the fourth season of Top Chef Masters. He also authored the cookbook Beginnings: My Way to Start a Meal.

He spent much of his childhood clamming, fishing, and cranking his great-grandmother's pasta machine, learning the nuances of New England and Italian cuisine.

In 2011, he partnered with the publishers of the Wolverine comic book to write and create his own comic book and character.

One of his earliest jobs as a chef was at Rubicon, a restaurant partially owned by Francis Ford Coppola and Robert De Niro.

Chris Cosentino Is A Member Of