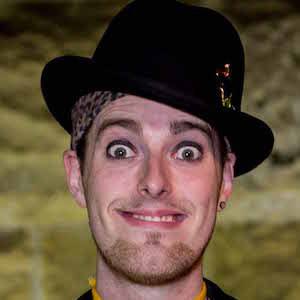 Magician and escape artist who first became known as an award-winning wedding performer. He has performed on countless television shows and been contracted by numerous celebrities for private events. He is also a retired contortionist, known widely for his dislocation act.

He learned his first magic trick at the age of ten, The Coin Vanisher. By thirteen, he'd begun performing in clubs, bars, and casinos and by sixteen he'd graduated and become a full time entertainer.

He is the owner and creator of the London club The Quayside Cabaret Club.

His real name is Christopher Alfred Goode. His girlfriend, Claire Gatens, is a wedding coordinator.

He challenged legendary boxer Mike Tyson to a test of strength where Tyson had to tie him up in 90 seconds with all his strength and he had to escape in the same time. The successful stunt was on ESPN's Sportsnation.

Chris Cross Is A Member Of