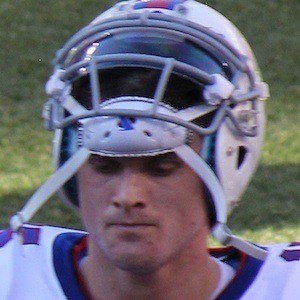 NFL wide receiver who established himself in the league during his time with the Buffalo Bills. He signed with the New England Patriots in 2016 and helped the team win Super Bowls LI and LIII.

He played lacrosse for four years at Penn State University before using his final year of eligibility to play football at Monmouth. He signed with the San Francisco 49ers as an undrafted free agent in 2011.

He was on the Miami Dolphins' practice squad when the team was featured on Hard Knocks in 2012 and was often highlighted on the show.

He was born to James and Mary Ellen Hogan in Ramapo, New York.

On Hard Knocks, then-teammate Reggie Bush gave him the nickname 7-11 due to his penchant for always being open.

Chris Hogan Is A Member Of